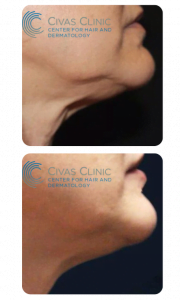 Before giving information about the treatment of non-surgical jowl aesthetics, we would like to state that six out of ten adults complain of excessive sagging or fat accumulation in the under-chin area, according to the data of the American dermatological surgery organization.

The most common form is fat accumulation under the chin and is called double chin. The most important cause of fat accumulation is genetic predisposition, and it also occurs as a result of diet, aging and their combinations.

Which Methods are Used in Jowl Aesthetics?

Liposuction is the most popular surgical method, and it is the aspiration of the adipose tissue in this area. In addition, neck lift surgeries are said to be another surgical method. However, patients have been in search of non-surgical methods in recent years.

Is there a non-surgical method used in jowl treatment?

In the treatment of jowl aesthetics, the problem that causes the formation of the jowl is fat accumulation, and the appearance under the neck and chin is improved by melting the fat in this area with the treatment. For this purpose, deoxycholic acid (Kybella amp.) was the first drug approved by the FDA.

A drug containing deoxycholic acid is given as an injection into the subcutaneous adipose tissue. In fact, deoxycholate is a molecule produced naturally in the body to burn fat.

Who is not suitable for Non-Surgical Jowl Aesthetics?

Fat melting treatment is not suitable for those with a mild jowl level, those with an infection at the injection site, and those under 18 years of age.

Who Can Apply Non-Surgical Jowl Aesthetics Treatment with Injection?

It should be applied by specialist doctors who have sufficient knowledge and experience on this subject.

What Side Effects can be Encountered After Fat Melting Injection?

Side effects such as edema that heals in a few days after the procedure and redness and bruising that end within hours may occur.

How Many Sessions Do I Need to Apply Deoxycholic Acid Used in the Treatment of Jowl Aesthetics?

On average, 2-4 sessions will be sufficient. Depending on the situation, your doctor may recommend additional treatments.

What is the Difference Between Sagging Under the Chin and Double Jowl?

The jowl or in other words, the chin, is the accumulation of fat under the chin. Skin sagging under the chin, on the other hand, is a condition that occurs with the effect of gravity with age and expresses sagging only with the loosening of the skin.

How Is Sagging Under the Chin or Neck Treated Without Surgery?

How long is the duration of botulinum toxin?

Botulinum toxin works by binding to receptors that provide nerve signals to ensure the functioning of the muscles. However, since…

Can I have a better skin with Facial Skin Renewal? For facial skin problems caused by aging or other damage,…

Do hairs come out again after laser hair removal?

Although the duration of the epilating session may vary from person to person and the areas applied, in optimal conditions…

Thyroid disorder is a metabolic disease. Located in the front of the trachea, the thyroid gland weighs 25-45 grams and…

How to treat varicose veins with laser? The laser is a multi-focused beam of light. Laser heat destroys a vein,…

Nutrition Recommendations to Prevent the Risk of Corona Virus (Covid 19)

Various nutritional recommendations have been published which may be considered to be preventive, which can be used as an integrative…

Non-surgical methods for correction and amelioration of facial asymmetries; Asymmetry to some extent may occur naturally in our face. This…

Does Botulinum toxin (Botox, Dysport) work in the treatment of tooth tightening?

Botulinum toxin (Botox, Dysport) injection is used in the treatment of tooth tightening called bruxism. When sleeping, the clenching of…